Skcin have delivered many national awareness campaigns
across at risk groups and have gained national awards...

Skcin in partnership with AXA PPP Healthcare
promoting the importance of sun safety to families...

Skcin are lead member of political lobby group Skin Cancer UK
and proud to work with other groups to campaign for action...

Skcin have delivered many national awareness campaigns targeted at high risk groups, to help educate the general public on the importance of sun safety and how to prevent and detect skin cancer. Here are a few of our previous campaigns including the multi-award winning ComputerTan!

Skcin teamed up with the English Golf Union (EGU) and pharmaceutical company LEO Pharma, to raise awareness of skin cancer among the UK's 3.4 million regular golfers with a poster campaign in all the England Golf club changing rooms. Skin cancer is the most common in the UK and those who spend time enjoying outdoor pursuits like golf are particularly at risk.

Each round of golf can chalk up an extra five hours of sun exposure and many of us underestimate the risk of sun damage in this country. Spending even a short time in the sun can cause sunburn, especially if you have fair skin. Although sunburn settles down after a few days, repeated sun exposure builds up over the years into sun damaged skin. Hopefully this campaign using Skcin patron Gary Wolstenholme MBE and Solheim Cup Captain Alison Nicholas MBE will encourage golfers not to "putt" their skin at risk whilst enjoying their game. 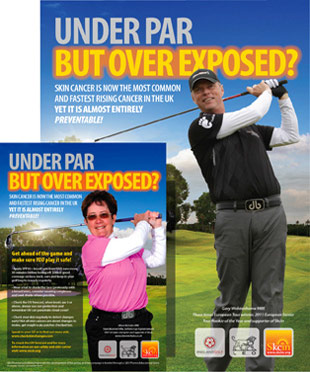 All about encouraging people to enjoy the sun safely via a radio campaign designed to make people think about over exposure to UV more seriously and the fact that it can cause sun damage to the skin and worst case scenario skin cancer, if sun safe precautions are not taken.

Inspired by the famous 1932 song 'The Sun has got his hat on', both 30 and 40-second versions of the radio ad use a section of the lyrics that specifically refer to the fun of "sitting in the sun all day." But the cheery, summery mood of the tune is interrupted by the chillingly flat voice of a man who states: "But later I got skin cancer. And it's hospital today."

By replaying this voice through one speaker, the spot creates an even greater sense of isolation and dramatic effect as the physical closeness of the sound makes the message appear highly personal. The ad then encourages listeners to visit the campaign website for further information. Find out more and listen to the radio advert at www.safersun.co.uk 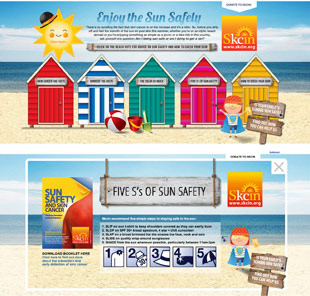 GIVE YOUR SKIN A GOOD FEEL

Sun damage to skin is a growing problem and every year in the UK there are more cases of skin cancer than breast and lung cancers combined. Skcin, Skin Cancer UK & Leo Pharma have partnered to make people more aware of the importance of visually checking their skin on a regular basis for any signs of change and in particular giving the skin a good feel to detect any rough, scaly patches that could be precursors to skin cancers.

A website has been developed for members of the public and healthcare professionals, that provides information on sun damaged skin, skin cancer and solar keratosis and advice on prevention, how to check for skin changes, and what to look for, as well as the importance of seeking further medical guidance. Please visit www.checkskinchanges.co.uk
You can also download our informative leaflet here 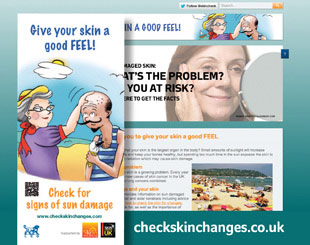 Following the huge success of the award winning ComputerTan (see below) we were fortunate once more to work with amazing creative advertising agency McCann Erickson and in August 2011 launched another spoof campaign called Sunny 3.

'Sunny 3' following in the footsteps of ComputerTan, also proved successful. This time the spoof was fooling people into thinking that they could triple the power of the sun's rays on their skin by applying a product called Sunny 3 - a cream with Scandinavian origins originally used to increase the production of Vitamin D in people living in sun light deprived arctic regions. The fake e-commerce website, videos, blogs and news reports showed how the product has now been adopted by teenagers across the globe who were using the product to triple their tan creating a new phenomenon called "night tanning".

A fake e-commerce site selling the product at www.sunny3.co.uk was created where tanners could order their free samples by putting in their email address. The craze was then furnished with fake Swedish news reports and fake videos of tanners using the product and achieving dark golden tans - in fact everyone who appeared in the videos was wearing fake tan, which in our view is the only safe tan there is!

Within just one week 15,000 people ordered the Sunny3 product with 90,000 people engaging with the hoax and a further 250,000 people touched by the campaign through social media, in all proving an immensely successful, highly targeted campaign!

Check out the movie clips and campaign summary here to see how powerful the campaign was in targeting a very specific group of individuals who were desperate for a tan at any cost! http://www.youtube.com/watch?v=CHDYYOys754&feature=youtu.be

Computertan was a spoof campaign created for Skcin by London agency McCann Erickson.
The ingenious campaign convinced over 1.5 million tan seekers that they could get a tan from their own computer screen just by logging in to a revolutionary new online tanning service called
ComputerTan.

The Cultural Connector
Yearning for bronzed skin yet blissfully unaware of the dangers of subjecting the skin to ultraviolet radiation (UVR), our target audience actively seek the best ways of tanning themselves.
What better way to target them by convincing them of a new technology that would enable them to tan from the comfort of their computer screens?

To give our target audience exactly what they wanted (i.e. the newest and most effective way of getting a tan) we developed a revolutionary piece of software that enables people to tan themselves from the comfort of their very own desks by simply logging on to computertan.com

In order to drive traffic to the site we developed an infomercial offering free online tanning sessions at computertan.com. This was seeded across the web as well as being PR'd across key bloggers for relevant interest groups together with an extensive national press PR campaign.
25,000 flyers offering free tanning sessions were printed and distributed and the film was displayed on 50 digital cross track panels in 10 London Underground stations and on 1000 London taxi screens. In a second wave of activity, an iPhone application was launched and sent out to our email database with further supporting online advertising.

Once at computertan.com, the user is guided by our infomercial presenter Hannah Yasmin to learn more about the company behind the technology. They are invited to view related tanning products and learn how to improve the effectiveness of their free session.

Only when they are 20 seconds in to their free trial does it become apparent that the company and their technology is a hoax. Five images depicting the ravaging effects of skin cancer appear on screen counting out the number of people that die each day from the disease. It is at this point that the user is introduced to the real people behind the campaign, The Karen Clifford Skin Cancer Charity (Skcin). Users can then visit Skcin's website or hoax a friend in to logging on to the site.

The Results
Within 24 hours of launch, computertan.com had received over 30,000 hits.
Within four weeks the number of hits had reached over 230,000 from an incredible 180 countries.
The site registered nearly a million page views with an average dwell time of over 2 minutes.
1.7million people were exposed to the CBS digital cross track panels, 700,000 more through London Cabvision and sister media agency Universal McCann achieved over 17 million page impressions from their online bookings.

National media
Limelight's PR campaign delivered extensive national press coverage across titles such as The Sun, The Independent, The Daily Express, The Guardian and also online with BBC News, BBC Radio One, The New Zealand Herald, Fox US and Yahoo News with a total of 66 specialist news stories.
Rubber Republic, our online blog partner, secured coverage across 8,100 websites.

ComputerTan was delivered pro bono by the agencies involved. Its greatest achievement has been its ability to highlight the risk of skin cancer to a new audience through an innovative and brave creative approach. As a campaign, it has given Skcin and the work that it does a strong platform to build on for future communication.

The ComputerTan website URL is no longer in use, but the campaign and its evaluation can be viewed via the following links...